Highlights include the repeated capsizing of the boat steered by Hyori’s team and the Family members washing and cleaning each other off after the muddy play. Carrying out the first assigned task, the Family catch fish in a nearby stream before heading to a local water hold to perform acrobatic dives off a cliff. In the morning, the wake-up mission involves throwing a tennis ball at a Velcro bulls-eye target worn by Jaesuk; Jongshin, Jaesuk and TOP are held responsible for breakfast. Later, the Family re-combine to play a race game with buckets of water balanced atop their heads; highlights include Chunhee tripping and falling and Yejin playing foul against Jongshin. While the trio digs for mudfish, highlighted by multiple slips in the mud, the rest of the family resume cooking of steamed buns, highlighted by Chunhee being splashed by a defunct water faucet. Coming in last, Jaesuk selects Jongkook, Daesung, and Jongshin to remain late on the island with him to repair a greenhouse while the other members return home.

Due to Kang Dae-sung’s absence, two guests were featured. Han-sun accompanies Jaesuk and Daesung “Dumb and Dumber” in search of flatfish. During cooking, Wonhee continues to push the women to do labor, causing ire from Hyori and Yejin. Although only able to catch one fish, Rain and Chunhee prepare a tasty dumpling and fish soup with the broth Rain brought. Seonhakdong Village, South Jeolla. Dinner preparations include Hyori, Jongkook, and Sung-hoon going off to get vegetables and while at it, the two strong men play a series of games where the loser receives punishment. Highlights of the game include piggybacked jumps from the Hyori-Jaesuk and Yejin-Jongshin tandems.

Gaemideol Village, JeongseonGangwon. Highlights include Yejin battling Jongkook to reveal his less mature childhood tendencies and how comparable the present day personalities of most members are to those from their grade school days. During sleep order rankings, the Family attempt celebrity imitations and impromptu poetry. During dinner preparations, the audience is introduced to the “Stepmother Kim and Chundrella” characters, as well as Chunhee’s trademark children’s Cinderella song.

The Family then head to the beach to play a wrestling game between teams headed by Henney and Jongkook. During dinner, the exhausted and well-fed trio Jongkook, Jaesuk, and Jongshin must appear hungry to not reveal their clandestine detour. Jaesuk, Hyori, Jongshin and Yejin are tasked with night chores of dog feeding and night chores, but not before an impromptu dance session as the Family attempt to reproduce Dambi’s dances in the barn. Returning home, the Family forms subgroups for dinner preparations.

As the Family re-gather, they play an ice-block carrying game, with the men performing ridiculous demonstrations of strength to earn Yoona’s pick, including Jongshin breaking an ice-block with his head. After eating, the Family welcome the homeowners’ return. Upon reaching home, Jongkook takes out his frustration from losing in most of outihg games ylona on Jaesuk who in turn begins playing around with other members and ends up receiving punishments as well.

Arriving at the barn, the Family herd cattle and spread sawdust. Highlights include the members attempting to introduce humor by spilling and falling into the water, with foul play along the way. During cooking, Wonhee continues to push the women to do labor, causing ire from Hyori and Yejin.

After eating, the Family compete in a jumping contest to hit their head against a dangling lightbulb, with much teasing of Jongkook during a love-line with Yejin and Hyori.

Many humorous moments arise as a result of water leaking into their bib pants, with 1 Sungrok reminding the audience of Chunhee with his clumsiness and 2 G-dragon ouhing Jaesuk being held upside down to drain their bib pants, with mouthfuls of water as a result. The Family roast the clams and prepare a kimchi stew for dinner, then partake in an individual competition to roast open clams.

Returning home with their fish, Yejin reveals her “savage” fish preparation abilities while the other members look on with wonder.

After enjoying the five-grained rice dinner, the Family gather to set their ‘Full Moon House’ ablaze while Yoona puts on a dance performance of ‘Gee’ and Hyori’s ’10 Minutes’ and the members declare their wishes for the Family. Carrying out the first assigned task of visiting the uninhabited island, the Family build a canopy before playing a water game aimed at pushing the opponents off their float. Hangae Village, SeongjuNorth Gyeongsang. Highlights include the Family teasing Yejin’s attempts to hide facial bloating with sunglasses and Jaesuk jokingly referring to Daesung as Kim Jong-kook.

The pairing proceed to peacefully cook kimbap and egg soup, only to have Hyori and Jaesuk nagging them throughout the process. During the sleep order rankings, the Family role play to compete to be the most pitiful.

For the last episodes of Season 1, previous members Lee Chun-hee and Park Ye-jin along with Park Si-yeon, who has been absent due to a back injury, return for a reunion.

With the new “Family” comes new pairings and characters: Highlights include inept physical performances from Jaesuk and Jongshin leading to their trademark sad accordion music. The members then split into teams and deliver the gifts.

Following dinner, the Family enjoy a game of guessing each other’s pet peeves, weaknesses, and other habits worthy of laughter. The Family gather at the village with Dambi, discovering inclimate weather upon arrival, and head to the canola fields to harvest some flowers. The four of them go off to the viwtsub and buy ray fish to prepare. The Nation’s Siblings’ performances garner them first-place rankings, although Jaesuk is, nonetheless, relegated to cramped sleeping quarters. 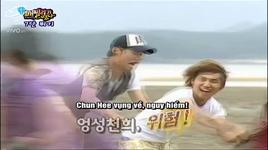 The Family arrive at the village and enjoy the homeowners’ apricot tea before heading off into the bamboo forest for some games and harvesting of bamboo shoots.

Back at the house, the Family separate into teams to prepare dinner, with Henney, Chunhee, and Jaesuk charged with buying rice cakes, where Henney acts out a CF. 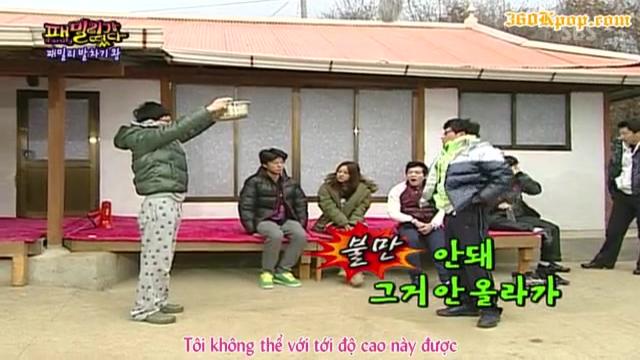 Meanwhile, the other Family members vietssub gastrodia tubers from the field, featuring an impromptu concert encore performance from Jongkook. Returning to the house, the Family catch a duck for dinner and split into teams for dinner preparation. The Family gather at a local village and play around in a lotus pond, competing in a team boat race.

After eating, the Family feed the cattle and take a break to play a game of team “musical chairs” with a large haystack, featuring Taehyun’s biting foul play and Jongshin’s backwards underpants.

Cooking highlights include Chunhee playing rock-paper-scissors with Hyori to gently slap each other with spatulas.

Returning to land, Sooro arrives and the Family enjoy a “capture the flag” game, fighting in the snow; much foul play ensues, largely aimed at Jaesuk.